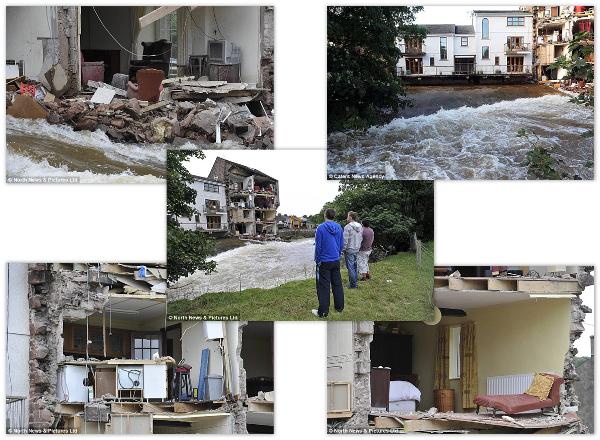 Cherry and Griffiths have been instructed to help the owners with their insurance claim following the collapse of their 4 storey house in Egremont Cumbria which made national news headlines across the main TV & national newspapers yesterday.

C&G’s Nathan Robertson met the building owners as the tragedy unfolded and explained Cherry and Griffiths “caring help you get your full entitlement insurance claims ethos” and how we could help them in the face of the disaster of losing their home in such a manner.

As a result, we are delighted that they made a wise choice to instruct C&G to help them with the resulting insurance claim.

Here is an excerpt from the Daily Mail report:

First, the neighbours heard an almighty rumble. Then there was a splash.

Collapse: The alarm was raised just after 6am this morning when residents of Vale View in Egremont, Cumbria, were woken by a loud rumble and a splash as the back of the property crashed into the river

But none of that prepared them for the scene they encountered when they looked outside.

The whole back end of this house had crumbled into the rain-swollen River Ehen in Egremont, Cumbria.

The street was sealed off and the Environment Agency issued a flood alert after water levels rose from 2ft to 6½ft in just 24 hours.

Thankfully, the owners of the end- terrace property had been staying elsewhere. Ken O’Hara, 57, and Belinda Taylor, 49, were given the bad news by police after spending the night in the nearby Blackbeck Hotel, which they also own.

Their tenants, who live in the top half of the four-storey house, were also unscathed, having gone away for the bank holiday weekend.

‘It just shows what can happen. Luckily there was no-one in at the time it happened. It would have been awful if there were.’

He said the top two floors of the four-storey home were rented out to Sellafield workers, who were also not there last night as they had been away for the Bank Holiday.

The couple, who live in the bottom two floors, stood watching helplessly as their possessions were battered by raging waters.

Click here to read more and see a video of the scene.